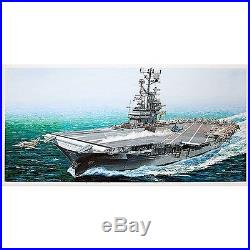 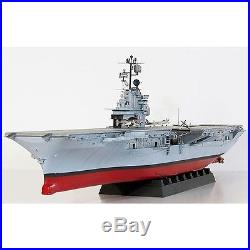 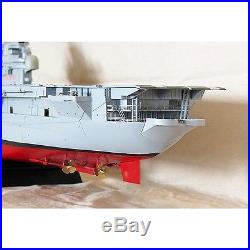 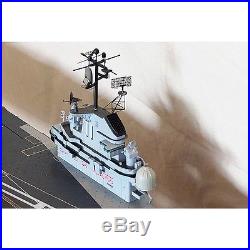 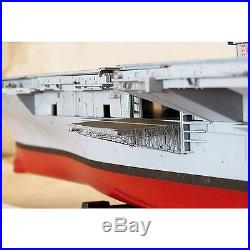 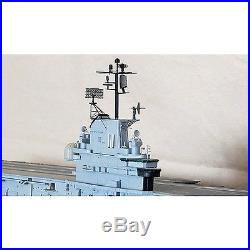 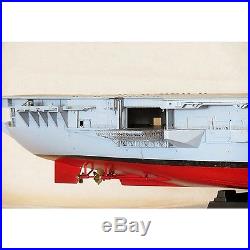 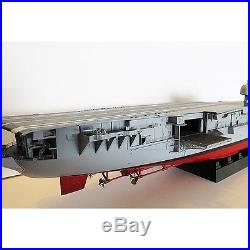 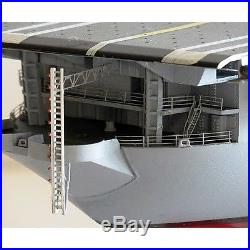 USS Intrepid (CV/CVA/CVS-11), also known as The Fighting “I”, is one of 24 Essex-class aircraft carriers built during World War II for the United States Navy. Commissioned in August 1943, Intrepid participated in several campaigns in the Pacific Theater of Operations, most notably the Battle of Leyte Gulf. Decommissioned shortly after the end of the war, she was modernized and recommissioned in the early 1950s as an attack carrier (CVA), and then eventually became an antisubmarine carrier (CVS). In her second career, she served mainly in the Atlantic, but also participated in the Vietnam War. Because of her prominent role in battle, she was nicknamed “the Fighting I”, and in 1982 Intrepid became the foundation of the Intrepid Sea, Air & Space Museum in New York City. Includes display stand with name plate. Full hangar deck with positionable elevators. Includes four A-4 Skyhawks, four F-8C Crusaders, four A1H/J Skyraiders, two E-1B AEW Tracers, and four UH-2B Seasprites. 6 photo-etched sheets are also included. This finely detailed plastic model kit requires assembly and painting. Historia Emporium – The History Store is a full service and authorized model kit retailer. All scale models and accessories are new, in mint condition, and in their original factory packaging. The item “MRC 64008 US Aircraft Carrier Intrepid with Angled Flight Deck 1/350 Scale Kit” is in sale since Monday, May 09, 2016. This item is in the category “Toys & Hobbies\Models & Kits\Military\Sea”. The seller is “history_store” and is located in Hampton, New Hampshire. This item can be shipped worldwide.